To Øl Dangerously Close To Stupid (9.3%) 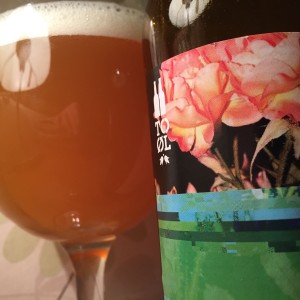 Brewed with, “close to a stupid amount of hops,” this is one hell of an Imperial IPA.
Opening with a sigh, the beer sits in my glass a pale gold with a big fluffy head.
The smell isn’t quite as overwhelming as you might think it ought to be, but it’s still big and bold, fresh, fruity and fun, all jelly and chewy sweets.
But this is a beer that comes alive when you take a mouthful.
There’s a decent salted caramel and French bread crust malt, and then there are hops.
Quite a lot of hops.
If the additional hops in an IPA were to see it safely halfway around the world, then this beer could sail the globe twice.
The hops in here are an immensely sticky, mouth coating proposition.
The hops in question, now that you ask, are Citra and Centennial, so there’s plenty of lemon and lime, satsumas and green leafy herbs, redwood and tobacco.
The end result of this is that the hopping almost becomes sickly through sheer intensity.
The finish is long and sticky, prickly and bitter, but with a sweet honey edge.
Very good, but not quite as bonkers as I thought, and hoped, that it might be.