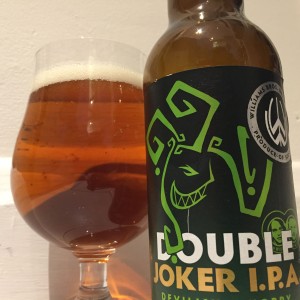 This was OK.
I wanted it to be far better than OK, but it was OK.
Pouring a light amber, the aroma was caramel and forest fruits, and a rather subtle aroma it was too.
None of the big nose full of smells you might imagine getting from a Double IPA, but pleasant nonetheless.
The malting was toffee popcorn and biscuits, and a little honey too, and the hops were sharp and herbal, some lemon zest and a dab of sticky resin.
So far so good.
But towards the end there was a big alcohol burn that made everything too hot in all the wrong ways.
A bit out of balance, that’s how I found Double Joker IPA.
OK, but only OK.