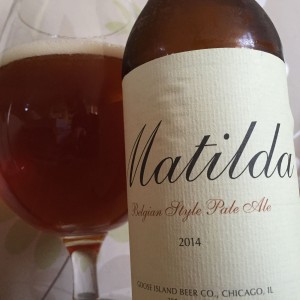 I had a girlfriend called Matilda (though to be accurate her name was spelled Matildé).
She was Italian and I met her in London at a gig at The Hope And Anchor where a mutual friend’s band was playing.
The band was called Montana Pete and I love them to this day.
There’s even video evidence of our first meeting which you can see below.
I am pretty much front and centre and the girl to my left is Matildé.
We moved to a flat in Brixton together and later went to live in Italy.
She couldn’t get her head around me having a daughter and this became such a big stumbling block that it’s pretty much the reason that everything ended.
That and me being deeply unhappy living in Italy (which is a story for another time).
Why am I telling you all this?
No reason other than this beer has made me think of her.
Matilda is a beautiful beer and she was a beautiful woman.
It’s a spicy, sweet, slightly acidic beer and she was a spicy, sweet and slightly acidic woman.
The malting is toffee and brown bread and the yeast wanders about all over the place with a lightly Lambic sourness.
(I won’t say that she was yeasty or sour as it’ll sound like she had an infection that needed treatment).
There’s a decent hop presence too, lots of resinous redwood, orange marmalade and lemon rind, sharp and pithy and fun.
She was all of those things.
But unlike the relationship with my ex girlfriend, I don’t want this glass of beer to finish as it is an absolute delight.
And wherever my ex is, I hope that she is happy and healthy and enjoying her life.