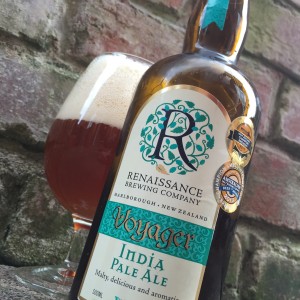 This bottle was very feisty as I opened it and needed pouring in two halves, its enormous cumulonimbus of a head big enough to make getting at the beer below rather difficult.
But when I did finally make it down there I was met with masses and masses of bitter dry tamarind.
And I mean real fresh tamarind.
The kind I remember eating until I was nearly sick because we a had a tree close to our house.
Rich and sticky and fleshy.
And that earthy tamarind punch coupled with a splash of aniseed and lime juice is very good indeed.
Voyager’s malting is sticky toffee pudding with a honey glaze on its doughy pastry, and the the aroma is floral, spicy and round.
The finish is toffee apple sticky with a good, and much needed, spiky bramble bitterness that makes Voyager an IPA that I want to have more often.