This began as a review of Siren’s Bones Of A Sailor Part III but has quickly become a meditation on barrel ageing beer.
Is everything that has been left to sit in a barrel for weeks and months a good beer?
Aged in Pedro Ximenez barrels and brewed with raspberries, cacao and vanilla, this is one hell of a drink.
And I’m not even sure that I like it all that much. 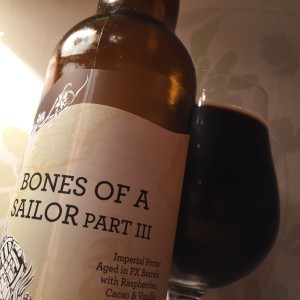 The aroma is brandy and fruit compote and the beer sits a deep dark purple brown, and rather flat, in my glass.
There’s an enormous vinous red wine tannin body to this beer, tongue drying and lip smacking, it reminds me of my days of drinking a bottle of Merlot every evening.
Underneath there’s treacle tart and black coffee, burned cinnamon toast and whisky.
You get a warm deep woodiness too, and some herbal green leaves, but everything leads you back to the rather flat boozy red wine dryness, and I can’t find the raspberries anywhere.
Bones Of A Sailor Part III is intense and enormous and well worth a try, but I’m starting to wonder with all this barrel ageing whether there comes a point where we might be blindly accepting bad beer because it’s been left to stew for a little too long.
A few years ago I opened a seventy odd year old bottle of Greene King beer at a #CAMRGB event in London.
It was winey and rather Port-like, but ultimately it was old and fusty and not overly pleasant.
I fear that we have gotten to a point where we, having spent upwards of a fiver (and sometimes much much more) on a half pint bottle of beer, are determined to like it whether or not we really do.
Don’t get me wrong, sometimes a barrel aged beer blows me away, makes me marvel at the magic of the blend of beer and damp wood, but often it all feels a bit limp and underwhelming.
I understand that after a brewery has invested money and time in storing a product for months before bottling it they’re going to want to recoup on their investment, but releasing everything they’ve left to “mature” ultimately means that some of the product they release may be less than brilliant.
So maybe we should all be a little less forgiving of barrel ageing and when a beer isn’t up to much we should say so, rather than meekly accepting that everything a brewer has left to grow old in a barrel is brilliant.

PS: While drinking this beer and writing this article I had Terminal Cheesecake’s “Bone Of A Saint” going around and around in my head, and now I can’t get rid of it.