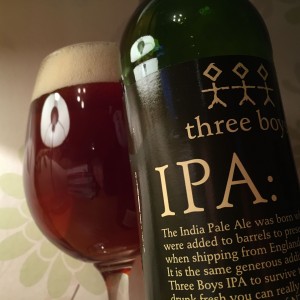 A few years ago when I was just becoming really obsessed with beer, and a year or so before I started CAMRGB, a good friend of mine who’d moved to New Zealand posted me three bottles of beer that he thought I’d like to try.
They took a couple of weeks to arrive and cost him a ridiculous amount in postage, but I’ll be eternally grateful to him as they were a great introduction into New Zealand beer and, I suppose more importantly were where I really started to learn about hops and hop varieties from around the world.
One of the beers he sent was this one and this is the first time I’ve tried it since then.
I remember being blown away by it at the time, how different it tasted to the beer I’d been used to, and it’s still pretty good all these years and all these beers later.
The aroma is gooseberries and green grapes and you find that in the flavour too.
There’s a lovely round biscuit, bread crust and honey malt that’s sticky and forms a good body over which the hops hit you with fresh green herbs, the aforementioned gooseberries, kiwi fruit and lime leaves.
The finish is sherbet fizzy, bitter, dry and crisp.
Three Boys IPA has transported me back to my embryonic beer geek days and I love it.

This review is dedicated to my old friend John.