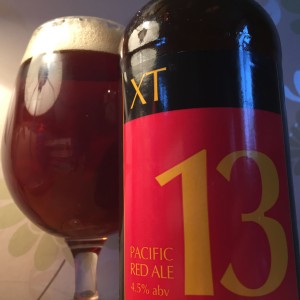 13 is a Pacific Red Ale and it’s drinkable but totally uninspiring.
An über light toffee aroma leads you to a round chewy toffee and digestive malt body with the merest hint of tamarind.
The hops are distinctly disappointing.
Considering there’s Galaxy, Columbus and Riwaka in here, they’re barely discernible save for a bitter herbal snap on your tongue.
Hidden amongst a bunch of other beers on a night out 13 would be fine, but in the electric light of a reviewer’s evening at home with nothing to hide behind, 13 is really rather boring.