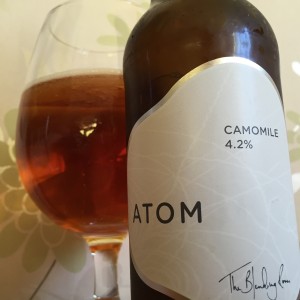 So there are two spellings of Camomile.
I didn’t know.
When I first saw this bottle I thought they’d spelled Chamomile incorrectly and so I did a bit of research.
It’s the kind of thing I do.
Chamomile and Camomile are both perfectly legitimate.
Anyhow, this little bottle of beer tastes terrific but smells a bit weird.
It smells of vanilla and cabbage and that’s not the most appetising combination.
There’s a soft caramel wafer malt, some burned brown sugar and a pinch of salt, along with fennel, hedgerow and lemon rind from the hops.
And all over this the camomile (chamomile) tea adds a warm rich extra dimension.
Tasting ever so slightly like iced gems, it makes for a round and satisfying finish.
So ignore the smell and dive right in, because however you want to spell it this is a fine little bottle of beer.