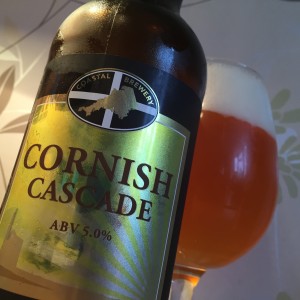 Brewed in Redruth, which isn’t strictly on the coast unless they’ve moved it since I lived in Cornwall, Cornish Cascade is a decent Golden Ale brewed with (unsurprisingly) Cascade hops.
What this means is that you get a lovely orange marmalade, lemon rind and lightly resinous wood pulp kick over the top of a solid, if standard, Golden Ale malt bill.
Caramel and ice cream cones, honey and shortbread form the body of the beer while the aroma is slightly yeasty hay bales and toffee, the beer sitting a shiny gold with a big frothy head in my glass.
Towards the finish Cornish Cascade gets a bit gassy and yeasty, but there’s a nice tamarind and tobacco thing wafting around that keeps the beer interesting.
Pretty good actually.