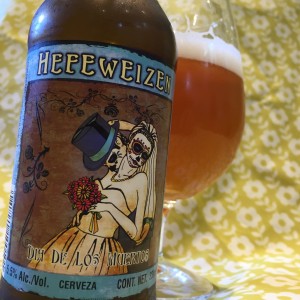 Don’t ask me because I don’t know why I was expecting this to be terrible.
There’s no reason at all why I would think so, I just did.
And I was wrong.
Very very wrong.
Because Cerveza De Los Muertos’ Hefeweizen is an absolute delight.
From its spiced banana aroma to its toffee coated fried banana body, from its toasted English muffin and prickly pepper to its zesty lemon and lime zest zing, this is a lovely little beer.
And now I want to try more from this Mexican brewery.
I just hope that they’re all as good as this.