Taking inspiration from the last crawl in this article , as well as adding a couple of additions of our own, a small group assembled at Bethnal Green station a couple of weeks back in our quest to drink in seven East London brewery taps in Hackney, Newham and Tower Hamlets. (route map) 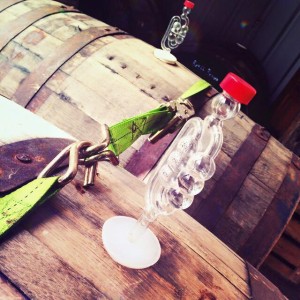 Our first stop was the Redchurch Brewery which is nicely tucked away in the back streets under converted railway arches. I have been here before and am a great fan of their beers such as Shoreditch Blonde, Hackney Gold and Bethnal Pale Ale. It’s an ideal place to start early afternoon and is open to the public on a Saturday where you can relax, sample their ales in a laid back upstairs bar complete with turntables (you can put records on too) and a dart board.

I tried the Little Earth (5.2%) which was a Belgian inspired tart sweet and sour brew whilst others sampled the Petit Mort (a Saison) and the aforementioned blonde. It was tempting to stay for more but we were sticking to our pint a brewery plan so it was back to Bethnal Green for a short hop on the tube to Stratford. After slowly moving through the crowds at Westfield shopping centre (Stratford International DLR is nearer and you avoid 99.9% of the shopping centre) we came to Tap East, a micro brewery I visit on a semi-regular basis.

Sadly they did not have many of their own beers on. I plumped for a pint of Ilkley Mary Jane (3.5%), a firm favourite of mine with it’s floral aromas and citrus taste, whilst others sampled the brewery’s own Ginger Beer’d (5.7%) giving it the thumbs down for being a bit bland with the ginger not being powerful enough! It was a pretty disappointing visit but that should deter you from going. Just one word of warning. The beers on keg can be very expensive so ask before you buy! 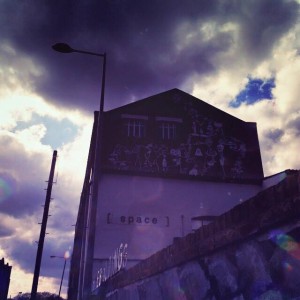 our next destination, the Crate Brewery (nearest station Hackney Wick, a 2 minutes walk away) situated in a great looking white painted large industrial building. As we came across the bridge we could see it was absolutely rammed both inside and out and it seems to be a popular venue for the trendy young things and the older hipster crowd enjoying the area’s revival.

Amazingly we got served pretty quick and I enjoyed their Golden (3.8%) which is light and hoppy with a malty aroma. One of the group had a Porter (4.1%) which tasted a bit too sweet for me. The place had a casual laid-back vibe and smelt of their home-made pizzas. The queue for the toilets were a bit long though and were none too pleasant apparently.

Crossing my legs we headed (hobbled) through the twist and turns of the back roads heading back into Tower Hamlets in our quest to find the Truman Brewery tap. We passed the brewery itself which was holding a home brew competition (no luck trying any) and, after saying goodbye to one of our group, headed around the corner to Swan Wharf. It’s a bit tricky to find and I am sure a walk along the canal to Old Ford Lock , which is opposite Swan Wharf, would have been quicker but we eventually found the place. 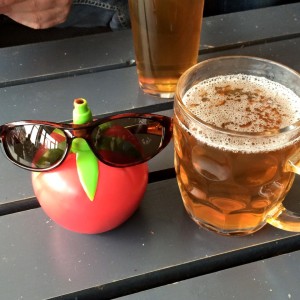 Formerly The Cygnet it is now called The Plough @ Swan Wharf and is run the the same people who run The Plough in Homerton. Again it was a nice looking venue in another of the area’s old warehouses and, with a strong emphasis on food, it resembled a canteen. It also has a very large outside area. It had three Truman beers on offer and having tried the Zephyr and Swift before I, like the rest of the group, opted for Budburst at 4.2%. Unfortunately it was served so cold it rendered the beer tasteless and all the promise of grassy hops and citrus flavours evaporated – unlike the beer which was still freezing cold by the time we left.

Our next walk was onto Dace Road then up to the Hertford Union Canal passing the now defunct Top Of The Morning pub frequented in my youth. We crossed Victoria Park heading to yet another pub where the young moi spent far too much time in. Formerly The Falcon & Firkin and some horrendous efforts in between this grand building is now home to the horribly named People’s Park Tavern. It is also home to one of the three breweries run by the Laine Brewery Company (Peoples Pints).

They had a number of their beers available on both cask and keg and I went for the Oh La La Saison (6%). It’s a golden beer being dry and packed with fruit which was dangerously drinkable with it’s taste belying its strength. The pub was very busy and we sat in the rammed beer garden. It was extremely popular but far and away the most expensive place we visited that day. Four pints (two were on keg) was 10p shy of a twenty pound note but hey it is still worth a visit if you are in the area. Just remortgage your place first………….

We then set off on the longest walk of the day through both sides of Victoria Park and the back roads of Hackney before coming to the London Fields Brewery Tap.

Amazingly it was quiet unlike my last visit and we all went for the breweries flagship Hackney Hopster (4.2%) which is now an orange coloured, citrusy pale ale brewed with Kiwi hops. Very refreshing despite it’s dryness! Given our walk our glasses were emptied without much effort at all and we then cut through 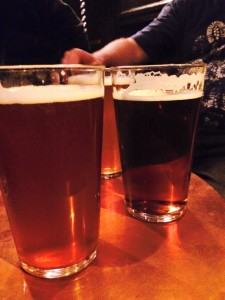 London Fields, passing another old watering hole in the shape of The Pub on The Park, which sells a number of locally brewed beers, ending up in the Cock Tavern which is the home of the excellent Howling Hops Brewery.

I have written about this place before. I have been here many times since and it does not fail to disappoint come rain or shine.. The beer range they brew is incredible and I chose one new to me in the shape of Howling Hops Pale XX (6%) which is an American style pale containing numerous hops beginning with C. I wonder what they could be eh? Again very drinkable. The pub was as lively as ever and it was good to finish on a high.

After note: I have since visited three of the taps since the crawl. I can confirm that it is quicker to walk along the Lea Navigation Canal To Old Ford Lock between Crate and The Plough @ Swan Wharf. The beer is still served way too cold at the latter and this time it was the turn of the Zephyr (4.4%) to suffer. Tap East also had a few of their beers on during our last visit there. The Smokestack Porter (6.5%) was simply amazing.