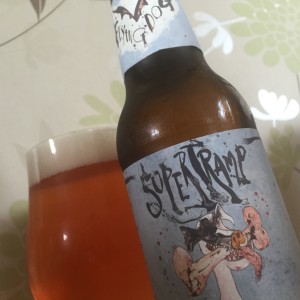 Supertramp is a “Tart Cherry Ale” and it’s rather nice, though it’s not really tart at all.
And to go further, it’s a bit Middle Of The Road, especially for Flying Dog.
Mind you, they have called it Supertramp who are, in my world, pretty much the epitome of Middle Of The Road.
So perhaps they are telling us that this beer is MOR before we find out for ourselves.
Anyhow, I opened this expecting a sour tartness but what I found is a gentle caramel wafer malt and a light herbal hedgerow hop with a rather nice, if subtle, red cherry pulp background.
And that’s about that.
Supertramp is light and refreshing and very easy to drink.
it sort of just washes over you without leaving anything of any substance.
A bit like the band.