I seem to be spe 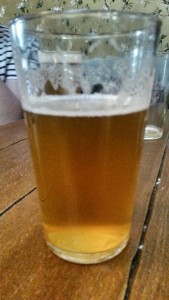 nding more and more time in Woolwich these days. Some may say unlucky but it does have it’s advantages. One of those is drinking one or more of the fantastic beers brewed by the Hop Stuff Brewery which is now the only independent brewer in the Royal Borough of Greenwich following SAB Miller’s acquisition of Meantime.

They have brewed some amazing beers this past year including the stunning Saisonniers and Renegade IPA which Simon writes about here. My own personal favourite is the APA (Arsenal Pale Ale not American!) which is a quaffable session beer packed with fruit and grass which is a staple pint in this part of South London.

The brewery have now started producing a range of single hop beers around the 4.2% mark which have started appearing in the loc 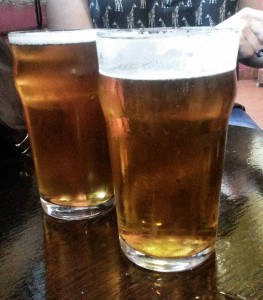 al hostelries. First up was Citra which as you would expect is fruity, sweet and dry. If you like Citra as much as I do then you cannot go wrong.

However as good as it is, it has been completely upstaged by their Amarillo*  which has bags of citrus fruits (grapefruit and orange) contained within and is one of the most refreshing pints (did I say pint? – oh well!) I have had for a long time. It also has a lovely aroma and is far less sweet than the Citra.

Next up is a Simcoe – I cannot wait!

Hopstuff opens it’s doors to the public the first weekend of each month. They will be open on Friday 5th June (18:00 to 22:30hrs) and the Saturday 6th June (11am to 15:00hrs). Check their events page for future dates.

The Citra was drunk at the Woolwich Equitable. The Amarillo was sampled at The Old Mill.

* Not to be confused with their recent Amarillo Mild (3.5%) which was pretty disappointing. I wondered where the Amarillo had gone and now I know!