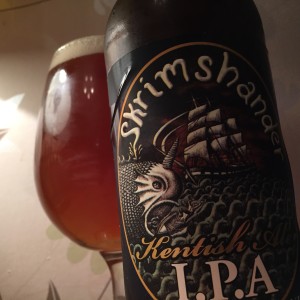 The notes that I made while drinking this beer last night are a bit sketchy and so I’m writing this more from memory than observation.
The reason that they are so sketchy is that I liked this beer so much I couldn’t concentrate on my notes as I just wanted to drink it.
Hopdaemon’s Skrimshander is an IPA with what I can only describe as a distinctly traditional English set of flavours and that’s what made it so interesting to drink.
After all the beer we drink being crammed with New World and US hops with all the lovely citrus delights that they bring, it was immensely satisfying to drink a beer that’s packed with marmalade and hedgerow, aniseed, toffee, tamarind and tobacco.
There were digestive biscuits in there too, and honey, and the beer felt round and chewy and warm, its finish satisfyingly hefty, bitter and rich and almost buttery.
I love my hops and I love modern beer, but last night Skrimshander reminded me that I should never forget how good English ingredients can be.