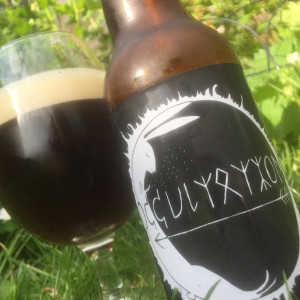 Funnily enough, I have a friend who runs a rather smart little record label called Occultation for whom I’ve done a bit of design.
This beer, if it were a band, would fit right into the label’s roster too, as it’s creative, delicious, interesting and above all, a bit mental.
An IPA brewed with coffee supplied by Has Bean, this is a beer to take down the rabbit hole, making you drunk while keeping you wide awake.
The aroma is freshly ground coffee beans in brown paper bags, and the beer slouches in your glass acting cool and louche, sure of its own sexiness.
What the addition of the coffee to this IPA Has done is to create a faux Black IPA, a pseudo Cascadian Ale (unless the malt bill is dark and heavy, though it doesn’t feel that way), as the coffee brings out all the toasty, treacle you might find in the body of a BIPA, and lets the hops knock you sideways with pine resin coated lime leaves, orange marmalade, lemon zest and mango flesh.
And all the while the fresh coffee is slapping you upside the head and keeping your senses pin sharp, making you absolutely aware of just how tipsy you’re getting while it sings you acid tinged lullabies that make the world slip away.
Wonderful.