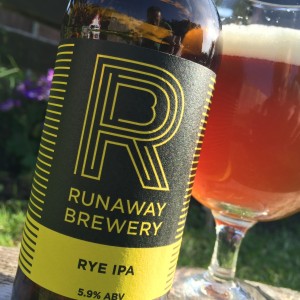 Another great little beer from the gang at Runaway, Rye IPA pours a lovely rich amber and smells both spicy and floral.
There’s a really nice creaminess to this beer, a rich butteriness that feels good without becoming oily, and it helps the round toffee, fudge and rye bread of the malts to stick around.
As you know, I’m a sucker for a rye beer, I just love the earthy spicy flavours that rye creates as it works so well against the zingy flash of the lemon rind, grapefruit and leafy green foliage of the hops.
The finish is sharp and crisp and bitter and I wish that this came in a bigger bottle.