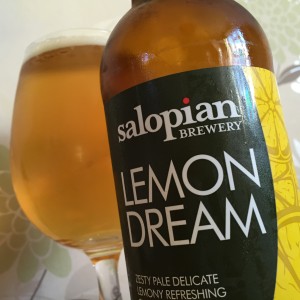 Lemon Dream has been around for a little while now.
In fact it’s a bit of a favourite around the pubs of Shropshire.
But this is the first time that’s it has been bottled and I’m pleased that it has as it will make it easier for people further afield to try it.
In essence this is a Golden Ale (though there’s probably a decent argument that it’s a Blonde), but it is so much more than that.
Brewing the beer with fresh lemons lifts this into a whole new sphere, the soft caramel, straw and shortcake of the malts sit in the background creating a decent body and the hops give you a sharp herbal hedgerow tang, while the lemons (lots of them) add a big splash of bright, sharp, zingy citrus that makes for a long, crisp, zesty finish.
Lovely stuff.