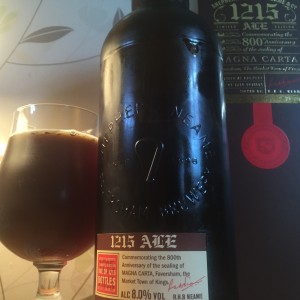 This limited edition ale has been brewed to commemorate the eight hundredth anniversary of the Magna Carta.
Only 1215 bottles have been produced and if you see any you’d be wise to grab hold of it as it’s a rather good and interesting ale presented a boxed 750ml bottle.
Brewed with ingredients used in ale before the use of hops became widespread, the mugwort, Yarrow, Woodruff and Fennel all combine to create an earthy, round, warm and satisfying drink.
You find a lovely fruitiness in the aroma, all plums and apples, leather satchels and cola bottles.
There’s a leatheriness to the flavour and feel of the ale too, with walnuts and liquorice vying for attention over the rich chewy treacle toffee and flan base of the malts.
And then there’s aniseed and nettle tea, all very English, all very drinkable, and in fact the further I go down the bottle the more 1215 begins to taste like a lovely alcoholic Dandelion & Burdock.
And that’s fine by me.