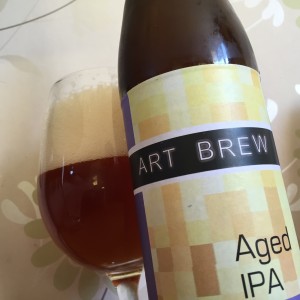 Only sixty bottles of this exist.
Well, fifty nine now.
This IPA has been brewed with a bunch of American hops and then aged for a year.
It was a bit feisty when I opened it, jumping out of the bottle and leaving me with some mopping up to do.
The beer poured with an enormous cumulonimbus of a head and smelled spicy, woody, yeasty, in that order.
There’s a decent caramel wafer malt, some salt and pepper, and a slightly damp undergrowth feel to the grapefruit and lemon hops.
And all over the beer there’s a subtley fungal wood pulp fug before a finish that’s immensely pithy and dry with a gassy yeast blast right at the end.