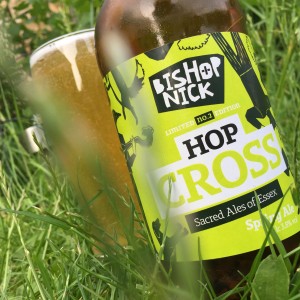 Hop Cross is refreshing in the same way that a glass of water is refreshing.
But then that’s hardly a surprise given that this appears to be water that has been shown some malt and hops on its way to the bottle.
Pouring almost clear, there is next to no aroma save for the wimpiest lemon barley whiff.
The malting is barely there, like the ghost of caramel and shortcake, and the hops excuse themselves just as you take a swig so that the lemonade and leafy herbs that pop up immediately disappear again, leaving you with clean clear refreshing water.
Sadly this is the third or fourth beer from this brewery that I’ve been completely underwhelmed by.