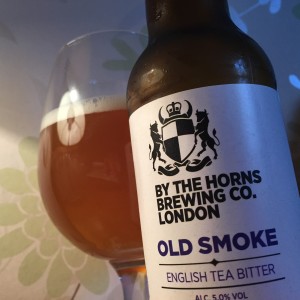 It’s terribly sad that my first thought was, “at least it’s not off,” but I’ve had so many bad bottles from this brewery lately that this came as a pleasant surprise.
Old Smoke is a Bitter brewed with black tea and a lightly smoked malt, “spruced with Bergamot oil.”
It’s a collaboration with Joe’s Tea Company and it’s rather nice.
This is a golden beer that smells of perfumed old smoking rooms and its malts are biscuits and honey.
There’s a soft green bitter hedgerow hop and some hay bales, and then there’s the tea and bergamot.
Earthy and rich and round, it’s bolstered by the fireside warmth of the smokiness and this makes for a rich, sweet, comfortingly late night feel to the finish.
Most importantly, I’m hoping that this means that By The Horns have sorted out whatever issues it was that they seem to have been having with their bottling.