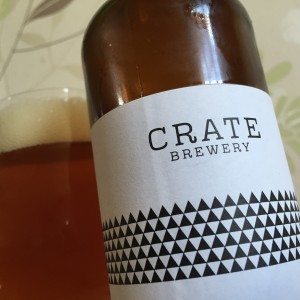 This is a fruity little number.
Crate’s IPA pours a deep amber with a big fluffy had and smells of strawberries and bread dough.
There’s what I can only describe as an enormous chewy monster of a malt.
It sits heavily on your tongue, clings to your gums and weighs you down with its toffee and bran flake goodness.
And the hops are pretty hefty too, all Chinook and Cascade laden with tobacco and pine resin, fennel, lime and lemon zest, orange marmalade and more tobacco.
The finish is a gloopy punch in the face.
I like this a lot, but I’d like it even more if there was less of a sticky ending.