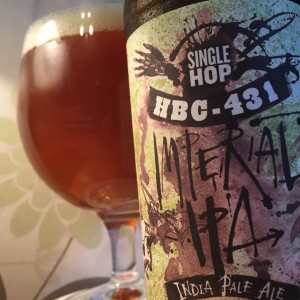 This is a single hop Imperial IPA brewed with the new(ish) HBC-431 hop variety, and I’ll tell you something for nothing, it’s a peppery beast.
The aroma is boozy peaches, pineapple and pink peppercorns and the big slouches all golden and sticky in my glass.
The malting is a skull coatingly thick gooey toffee and sherry trifle base, a pop corn, fudge and waffle boxing glove, and the HBC-431 slaps you with mandarin peel and orange marmalade, peppercorns, gloopy oily resinous woody goodness and a metallic herbal hit that’s sharp and keen.
The weight of the alcohol adds a chest warming heat, but also rounds off the edges of the beer, making them a bit fuzzy, removing the crisp bitterness and replacing it with fudgey pillows.
And we all like fudgey pillows.