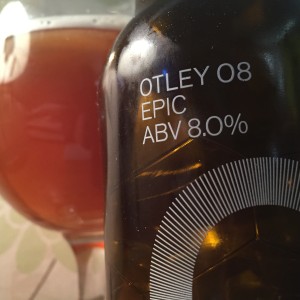 Interesting.
Is this a Golden Ale or a Barley Wine?
Or maybe it’s some odd Farmhouse Ale.
You get a yeasty, fungal funk, white pepper and silage á la Saison, that’s for sure.
But you also get a toffee biscuit thing from the malts, and a thick and sticky body that’s more akin to a Barley Wine.
Fortunately all the stuff that’s going on in this little bottle of beer manages to hang together rather than fight against each other and means that Epic, though rather hefty in the booze department, is a very enjoyable beer, if initially a little perplexing.