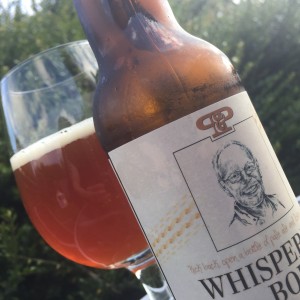 I’m absolutely blown away by this little bottle of beer named after “Whispering” Bob Harris.
Originally brewed on a home brew kit, this is called an American IPA with good reason.
Why I say that is that instead of giving the name to a beer that is simply stuffed full of American hops (which of course this is) Pig & Porter have managed to capture that thick woody resinous treacle thing that you find in beers like Sierra Nevada’s Torpedo and Flying Dog’s IPA, in fact so many American brewed beers have this underlying flavour that one could almost argue that it is to do with the terrior of the beer.
It’s squidgy and resinous, malty and fruity, and over it there are sharp lemon and lime zest hops which get glued to your tongue with lashings of orange marmalade, tobacco and peach fuzz.
All this and a fizzy sherbet bitter dry finish.
Whispering Bob is worth shouting about.