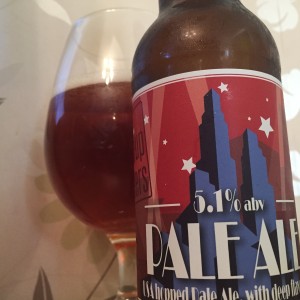 Beer from Brighton, Pin-Up’s Pale Ale has something not quite right about it and I think it might be the filtering and/or whatever happens during bottling.
There’s a very odd and slightly chemical tang that tastes weirdly clean and shiny but definitely not beery.
Whatever has been done has apparently ripped out the body of this beer leaving just its edges.
So you get a near scorching hop bitterness and a thumping malt base but without any defined flavour – no hop fruitiness, not even a lemon, and certainly nothing more than caramel in the malting.
There’s just no subtlety, no balance.
In fact there’s nothing much at all.