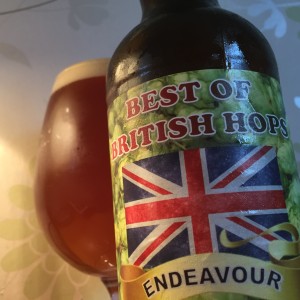 8 Sail’s Endeavour is part of their Best of British Hops range, and Endeavour is a hop that I’m not overly familiar with.
Moreover, based on this beer, it’s not a hop that I’m overly keen on getting to know more.
It tastes and feels like little more than a slightly amplified Fuggles, blackberry and aniseed, a little earthy undergrowth and some nettle tea.
The aroma is toffee, nutmeg and liquorice, and the beer pours a nice enough colour.
In fact this isn’t a bad beer in any way.
Not at all.
It’s perfectly drinkable and quite pleasant, it’s just that it happens to be showcasing a new strain of British hop that is nothing to write home about.