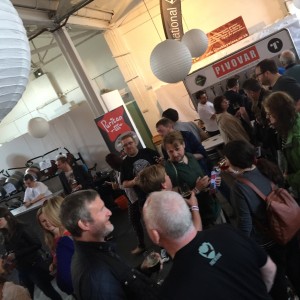 I love the venue

Now in its third year, Birmingham Beer Bash, or Birmingham Cubed as many affectionately know it, has started to feel established.
But never establishment.
The organisers have done a little bit of tweaking around the edges, but they’ve got a formula and a venue that they now know works brilliantly for a few hours spent drinking and as a result my visit to this year’s BBB felt less fraught, more settled in, more in control.
I began the day on a train with Chris (@titwillars) and no network coverage from 02.
It meant we had to have a chat instead of staring intently into our mobile devices, and on reaching Birmingham and meeting up with Darren (@circa79pritchy) and Paul (@PaoloFernley), it became apparent that they had had the same problem too.
First world woes are such a bummer. 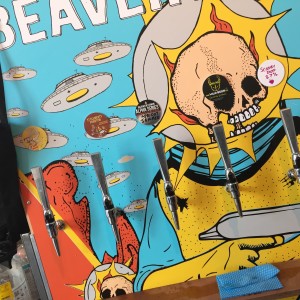 As we walked over to The Bond, the weather was trying its best to be nice and though it was nowhere near the balmy beauty of the last two years, it managed to remain dry and reasonably warm throughout the day.
We hit The Bond bang on eleven, were handed wristbands and glasses and we were in.
And there it was, my favourite beer festival just waiting to be enjoyed.
We needed a drink and headed directly to the Beavertown bar where I had a tart little glass of St. Clements Phantom (4.9%) which served to clean my palate in readiness for the afternoon ahead.
Immediately I started seeing faces that I knew and people that I wanted to say hello to.
It seemed like everybody was there, and it was rather pleasing to see just how many CAMRGB T-shirt wearers were in attendance.
After wandering around the site, walking between the main hall and the ante room, criss crossing the courtyard and its marvellous food stalls, I ended up in front of a handful of friendly drinkers with a glass of Weird Beard‘s Heaven And Hell Part 6 (9.6%), which was as big and gloopy an IPA as I remember it being. 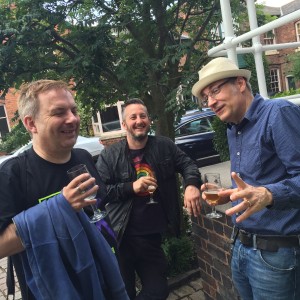 We found a quiet corner

Next up was food, and this year the BBB organisers have got it just about right with a wide enough selection of street vendors to cater for just about everyone.
Darren and I opted for a rather fabulous Texas style brisket from the amazing Low’n’Slow BBQ.
It filled the gap beautifully and with sauce dripping down my chin I went in search of beer, on the way bumping into David (@OthertonAleman) of Otherton Ales, one of the co-founders and organisers of Birmingham Cubed.
We had a natter before I left him to continue being busy while I found a glass of Black Jack Beers’ Sky City (7%) which was one of my favourite beers of the afternoon.
A succulent and fresh IPA made with New Zealand hops, it cut across my lunch with zesty fizzy goodness.
The rest of the afternoon followed suit, lazily strolling around the venue, bumping into people and having a good time. 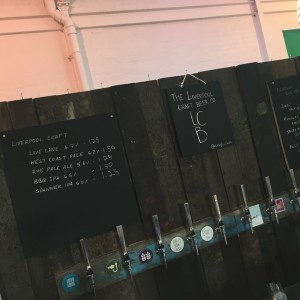 The other beers I drank on my way were Mad Hatter Brewing‘s sharp and tongue tingling Sorachi Face Hugger (6.3%), Mequite BBQ IPA (6.5%) which had nowhere near the amount of smoky mesquite that I was expecting, Off Beat‘s fresh and lovely Berliner Weisse (3.6%), a naughty glass of D’Achouffe Dobbleen Tripel IPA (9%) just because it was there, and Magic Rock‘s Bearded Lady Choc Orange (10.5%) which I thought overly sweet and sticky, the chocolate orange detracting from what is usually a remarkable beer rather than adding anything.
But my beer of the day came from Weird Beard.
Their Tsujigiri (6.2%) is a “Japanese” IPA brewed with Sorachi Ace, Yuzu and Saki yeast and it was an absolute joy.
Packed with sparklingly fresh zingy flavour bur tempered by a rich earthy body, I simply didn’t want my glass to be empty. 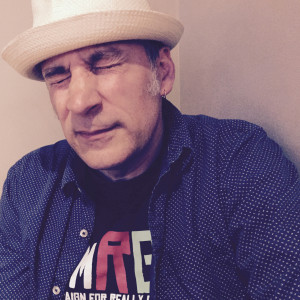 A face that says a thousand words.
Most of them slurred.

By now it was the end of the session and saying our goodbyes we wandered (or staggered, depending on how you look at it) up to BrewDog Birmingham for a totally unnecessary but good all the same glass of HiFi + LoFi Mixtape (8.8%) by Stone Brewing Co., followed by a cheeky half of Roosters’ Baby Faced Assassin (6.1%) in the Pure Bar and a lovely nightcap (even though it was only about 6.30pm) in the Post Office Vaults in the shape of a bottle of Orval (6.2%).
The train home was a blur, as was the lift back home from the station and I fell into the house at around 7.30 to find my family home from their holiday and two excited children who wanted my attention.
I probably deserved the pain.
If you are still to try the Birmingham Beer Bash I urge you to visit next year.
The only downside was a busker who had been hired to entertain and who did little more than create extra noise that we all had to try and talk over.

With thanks to David and the BBB gang who invited me along and allowed me to write the introductory article for this year’s program.

One Response to As Easy As BBB: Birmingham Beer Bash 2015