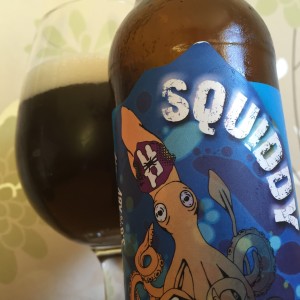 I first had Squiddy – Hardknott’s Squid Ink Beer – at Birmingham Beer Bash last year, and though I liked the playfulness of the beer in concept I wasn’t blown away by it in practice.
And nothing has really changed.
It’s certainly not one of Hardknott’s best, though in itself it’s a perfectly decent Pale Ale.
Albeit a Pale Ale that pours a deep dark blue black.
The aroma is lightly ozoney bouquet of flowers, and the shortcake and caramel of the malts are pretty decent.
Squiddy’s hopping is lemon juice and grapefruit zest, and the finish is crisp and bitter and dry.
But there’s something a bit thin about the beer as a whole, and maybe it’s just psychosomatic.
Maybe my beer brain cannot compute a black beer that’s not thick and round and gooey.
What I’d dearly love to do is to try Squiddy without the ink in it, just to see.