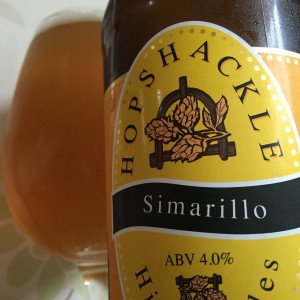 Nigel at Hopshackle was one of the first brewers I interviewed for CAMRGB.
There was something about Hopshackle that really set them apart from the other brewers that I was getting to know at the time.
And there still is.
It’s a certain subtlety, a lightness of touch.
On first taste Simarillo isn’t anything more than a well hopped Golden Ale, but as you drink you realise that there is some beautiful brewing going on in her.
Aroma is oranges, pears and hibiscus and the beer feels satisfyingly creamy as you drink.
There’s a gentle honey coated waffle malt and hops that kiss you gently with tangerine and pine, lime and peaches.
You see, there’s nothing outwardly outstanding about Simarillo, it’s simply a beautifully crafted bottle of beer.