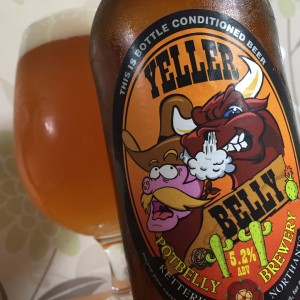 I’ve had mixed experiences with beer from Potbelly Brewery of Kettering, Northamptonshire.
Mainly I’ve been uninterested by what I’ve tried.
Yeller Belly – Terrible name, terrible label. Does it relate to the use of American hops, I wonder? – is rather good, though.
It’s a Pale Ale packed with lemon rind and orange marmalade with an aroma of sweet honeysuckle and tangerine and a nice warm golden colour.
There’s a good round caramel and wafer malt and some spicy bread dough from the yeast, and then there are the hops.
The lemon rind and marmalade mentioned earlier leads you to a finish that is bitter and dry and warmed through by the alcohol.
Yes, I like this one very much indeed.