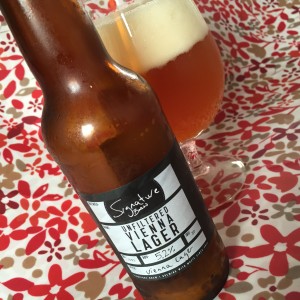 This is a decent honeyed Lager made slightly odd by a big yeasty blast when I popped the cap that was followed by what I can only describe as a “Real Ale” head as I poured.
You know that foamy big bubbled gassy head?
Yes, that.
But the beer tastes alright, the Saaz hops giving a spicy herbal hedgerow snap that bites into the malted milk biscuit and toffee goo of the malts.
The body initially feels creamy but those bubbles come on all gassy as you work your way down, and the finish is soft and chewy, if a little sweet.
All in all, apart from the odd bits, alright.