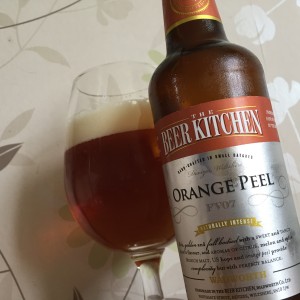 Wadworth have joined the “Craft” bandwagon with their range of micro-brewed beer under The Beer Kitchen moniker.
Supposedly this is, like so many things are these days, “hand crafted in small batches.”
I’m very pleased for it, but it doesn’t stop this beer being absolutely awful.
There’s an uninspiring caramel and surface cleaner aroma, a flabby toffee and biscuit malt, a lemony apology instead of hops, and absolutely no trace whatsoever of the orange peel that this beer is supposed to have been brewed with.
The blurb on the label says, “Rich, golden and full bodied with a sweet and tangy orange flavour, and aromas of citrus, melon and spice. Munich malt, US hops and orange peel provide complexity but with perfect balance.”
I have to disagree, micro-brewed or not, this tastes like a million other mass produced supermarket shelf fillers.