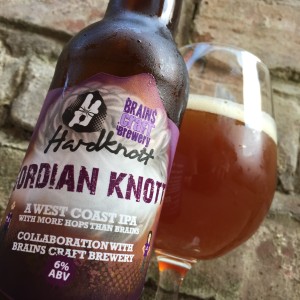 To say that I’m not a fan of Brains Brewery would be an understatement, and I’m even less of a fan of the beer they’ve brewed since dubbing themselves Brains Craft Brewery.
But this is a collaboration between Brains and Hardknott, and fortunately it appears that the Hardknott side of the equation has won out in this well hopped IPA.
There’s a big peach and apricot jam aroma, and the beer is a nice rich amber colour.
Gordian Knott’s body is round and chewy with chunky biscuits and caramel ice cream, and the hop are packed in tightly.
You find lime zest and orange marmalade, fresh green herbs, grapefruit and a little melon flesh before a superbly long bitter finish.
Hardknott really do know how to use their use their brains.