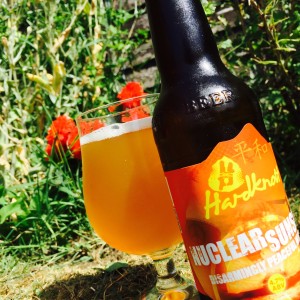 Hardknott’s “disarmingly peaceful wit” has a story to tell.
It’s the story of Dave Bailey’s past and his beliefs, and rather than me try and retell it and get it wrong, here it is in Dave’s own words,

Scott, my production brewer and I tasted a Japanese wheat beer recently which we really liked. It was a bit expensive and we thought we could do something really similar, perhaps even better.
The beer was to be brewed with the regulation orange peel and coriander, but to include orange juice and nutmeg. The Japanese beer is fermented with Sake yeast.
We chose an American ale yeast.
Scott thought that calling it Nuclear Sunset would be good, as we live in a part of the world in which we have an active quango called Britain’s Energy Coast and besides, the sunsets over the Irish Sea can be quite stunning. I though it would be a cool idea but started to think a little.
It occurred to me that the 70th anniversary of the first atomic bombs being dropped on Hiroshima and Nagasaki are just about here. I could not see that it would be wise to ignore that fact. The dichotomy surrounding the conflation of nuclear power, the very industry that gave me my leg-up, and nuclear weapons, is a genuine issue that concerns me on a personal level, probably much more than many people realise.
For this reason, I couldn’t just go ahead and call this beer by this great name without giving thought to the wider consequences.
Of course, being a brewer and a business man, I couldn’t ignore the very real possibility that the story we attached to this beer, and the the controversy, might blow us apart. We live and work in a community that on the one side has Sellafield, and on the other has BAE building nuclear deterrent submarines. In the wider beer world there are people who are mighty big in the view that anything nuclear is bad, with other people being real technophiles loving any futuristic solution to a better life. Would I end up upsetting everyone resulting in melt-down for Hardknott? I’m hoping this sort of personal approach will help prevent that.
I set about a justification for the name, and further thoughts about global issues such as global warming, or at the very least, the costs of fuel. You see, I have a conviction that much of the cost of living is set by energy costs. We live in an industrialised economy and costs are driven by factors such as transport costs, heating costs and energy to drive our industrial manufacturing processes.
Clearly these things all ultimately affect the price of beer.
I think we are better off with a diverse energy policy. We can’t stop burning fossil fuels tomorrow. We definitely should continue to develop wind, solar, hydro and biomass etc. but I do not think that renewables are a panacea. Every scheme has it’s objections, many people locally to us would have the wind turbines ripped down tomorrow if they had their way. I have a strong conviction that nuclear energy still has a roll to play.
Then there is global conflict, the very thing that for centuries has caused much human suffering. The atomic bombs that were dropped on Hiroshima and Nagasaki arguably ended the Second World War. We now have a nuclear deterrent. My former employers are only there because the UK decided after the war that it had no choice but to build a nuclear arsenal.
We’ve not had a nuclear weapon detonated in anger for 70 years. Will that last forever? I do not think we can be sure of the answer to that, or the best way to prevent it. I do know enough to know that death from extreme exposure to radiation is long, protracted and very unpleasant.
So, you can perhaps see that the story surrounding this beer has turned into a very personal story for me. What started out as simply an attempt to copy, and better a Japanese beer, has unearthed personal feeling about where I came from, career wise, where I’m going and where the world might be heading.
I hope you might find reason to write about me, my beer and my brewery. I hope also you might consider the very issues I am bringing up.
“What has this to do with beer?” you might ask. A good question. Beer is a big part of my life, and yours too. But beer is only a small part of most peoples’ lives. The lives of everyone in humanity are intertwined. The actions we make today, as developed nations, will effect the futures for many billions of lives for many years to come.
I want to think about that, and I think other people should to, over that next beer they drink, whatever beer it is, whoever it is drunk with and wherever it may be. Beer can be an emotive drink, and very often, over a beer, we can end up discussing emotive issues. We know we shouldn’t but we still keep doing it.

As for the beer itself, Nuclear Sunset is a delightful peach coloured beer that smells of gentle summer afternoons in the back garden, fresh orange juice on ice and a hint of hedgerow spice.
The beer’s body is a soft and squidgy caramel biscuit and a little sponge cake, and over this the hops are sharp and fresh and bitter.
The addition of oranges, coriander and nutmeg give a lovely fruity piquant glow that wanders around your palate and prickles at your senses in the most delightful way.
Nuclear Sunset immediately became one of my favourite Hardknott beers.