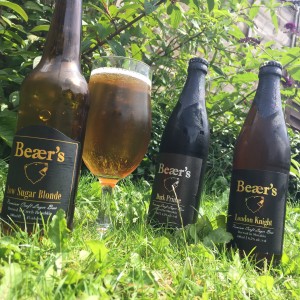 I was recently fortunate enough to be sent some beer to write about after a short conversation on Twitter about Lagers.
The beer came from Beær’s Brewery Co. who are based in Northamptonshire, but who’s beer is brewed in Slovakia and the Czech Republic.
What I was told about them mainly centred around their Low Sugar Blonde (4%) which is being marketed as Britain’s first low sugar lager and is rather good.
It does all the things you want from a light blonde Lager, a spiced orchard fruit aroma, a runny honey, brioche and caramel malt, and sharp green herbal hedgerow hops.
The finish is crisp and clean and though there’s a slightly odd papery feel it’s not enough to stop this being a decent lagered beer for a hot sunny day.
I was also sent Dark Prince (4.5%) which is, unsurprisingly, a black Lager that pours a deep chocolate brown and tastes roasty and toasty, full of coffee and chocolate, treacle, honey and walnuts.
It too has a good green herbal hop kick and a nice mellow finish.
But my favourite of the three beers is London Knight (6%), a nicely boozy Pilsner that has a chewy sweet shop feel, marshmallow and fizzbombs over a toffee and wafer malt and those same snappy green spicy herbal hops which leads to a long and bitter alcohol warmed finish.
All in all the Beær’s beer is eminently drinkable and well worth looking out for.