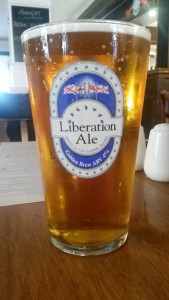 I have just spent a few days on Jersey (mainly in and around St. Helier) and in between the sight seeing I thought I would try some local brews. Trouble is, unless I am mistaken, there is only one brewery* left on the island in the shape of Liberation formerly the Ann Street Brewery. The Liberation Group also manage or are in partnership with a vast number of pubs and you are more than likely to find one serving their beers a few minutes away in any direction.

Their current flagship beer seems to be the Liberation Ale (4%) which we found in all of their pubs. It’s a golden beer and the blurb promised citrus taste with a fruity smell which got my hopes up. Sadly in each establishment where we tried it the beer was chilled within an inch of it’s life rendering flavour all but redundant aside from a faint hint of caramel. Even when the chill wore off I was hard pressed to detect any tropical fruit in taste or aroma resulting in a pretty bland and boring pint all round.

However it wasn’t all bad news as the only other beer from their cask range we tried (or even saw!) was a marked improvement. The IPA (4.8%) harks back to days gone by. There was a combination of refreshing flavour and aroma thanks to the Kiwi hops used but overall it tasted like a traditional IPA being very dry with a crisp and clean bitter finish. A very drinkable beer.

We drunk Liberation beers in the following pubs in St. Helier. The Peirson, The Post Horn and The Troubadour.

* The La Mare Wine Estate brews a beer flavoured with the local black butter preserve but it’s only available in their shops.

One Response to Liberation From Taste?