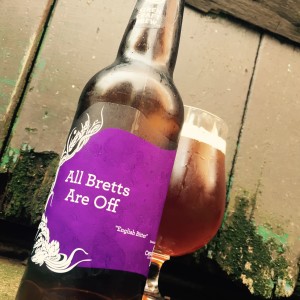 Brewed as a collaboration with Crooked Stave this beer is decent enough, but it’s nowhere near the beer that it promises to be.
All Bretts Are Off is an “English Bitter” using a traditional malt and hop base but fermented with twelve (count ’em) different strains of Brettanomyces yeast.
The aroma is pecans and toffee with the subtlest sour yeast tinge.
Taking a swig you find a nutty toffee and biscuit malt and some delicate aniseed and hedgerow form the Challenger and Fuggles hops.
But the beer feels thin and watery and there’s no punch at all from that big mix of yeast that supposedly, “quickly makes it far from ordinary.”
No, this is really ordinary.