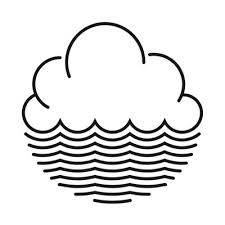 Some weeks ago I tried my first Cloudwater beer and was instantly hooked.
Hooked not only by how terrific the beer was, but also by the idea that this brewery was only going to brew seasonal beer and wasn’t going to have a core range.
I just had to have a chat with them.
This is what happened.

Hello, who are you and what do you do?
My name is Paul, and I’m one of the co-founders at Cloudwater.  Being part of such a small team we all tend to get stuck in to just about everything, but being part of a new company that’s finding its feet as we transition from start up to a working brewery I also take care of a few specific areas.
I tend to focus most of my attention on the financial side of the business, social media, branding and art direction, and take a leading roll in events that we take part in. Day to day I’m mostly behind a laptop and working on things I’d rather no-one else worried about. 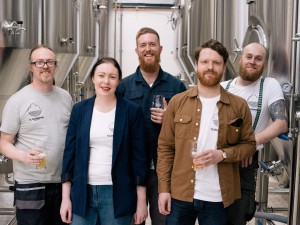 So, what’s your background?
My background is mixed.
I’m trained in Music Technology, and also in Mastering, but I’ve also spent years working in catering when I helped to run a small specialist cafe.
I dearly love music, audio production, and listening in general, but my love for food and drink is just as strong.
Both things can lead to transformative experiences for the individual on both sides of the creation/enjoyment relationship that I care deeply about.

You are obviously a bit of a beer lover, but how did you get to wanting to start a brewery?
I never really wanted to start a brewery, or be part of a brewery start up.
Even though I toyed with the idea of home brewing for a couple of years I never managed to get started – setting up in a precise, sterile way at home is no easy feat, so credit to all those home brewers out there whose cupboards are filled with brewing equipment, and who have installed PIDs in fridges to keep their fermentations under control!
When the opportunity to work with James arose I jumped at it.
It was more about seizing the chance to work with a lovely guy who’s been in the industry a long time and makes some fantastic beer than anything else.
There’s not many people like James, with twenty years grounding in traditional British beer, and a deep love for bold, hoppy, modern beer too. 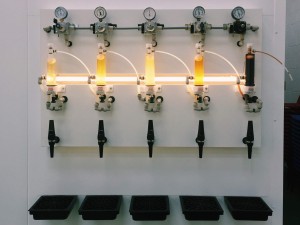 When did Cloudwater begin, how and why?
From spring 2013 I had growing interest in starting to work in the beer industry.
Firstly I looked into potential opportunities around brewpubs (with a somewhat modern British twist on the American model).
James and I started casually talking about a new brewery in winter 2013, and went on to start the company back in January 2014.
Our ambition grew as we looked into brewhouse manufacturers, available units in Manchester that were suitable for a brewery (and not owned or managed by someone opposed to the industry), before settling on a site in Piccadilly Trading Estate.
Why? Because while we’re alive we might as well do something we care deeply about.

Cloudwater is an excellent name and as graphic designer and design geek I love your branding, how did it all come about and who does it?
Thanks!
Cloudwater is an old Chinese term for wandering Buddhist monks.
It describes both their philosophy of treating phenomena like clouds (coming together according to conditions) and regarding obstacles as if they were water (flowing right past them with no interruption).
It also describes the way they’d wander from place to place in search of teachings and the truth.  It resonated a lot with the way I look at our seasonal approach.
We aren’t trying to make the same beer for years with ingredients that age and change over the months and can change dramatically from one harvest to the next.
Instead we’re taking each season as it comes.
What styles are we interested in right now?
What beer fits with this weather, and the things we usually do this time of year, and the foods we usually find ourselves drawn to each season?
In that respect, although we’re complete novices, we’re learning.
We pay attention to what’s available from nature, and think about how we can make the most of things whilst we have the chance.

I really like the idea of brewing seasonally as I grow (albeit in a very small scale) fruit and veg in my garden and we try to eat seasonally.
It’s an interesting concept as it is really rather old fashioned these days, to only consume the things available at any given time.
Especially in a world where we can consume what we want when we want.
Do you think you can sustain a business without a core range that is the same throughout the year?
Most definitely.
The market place today is one with more than enough people that celebrate new experiences as much as they enjoy reliable favourites from the past.
We’re not making life easy for ourselves at all, but we’re happy with the challenge we’ve set ourselves.
Seasonality has played a massive part in regenerating British food, and is at the heart of wine production (every harvest of grapes is a little different, and celebrated), so we’re looking to see what we can find in seasonal beer.
Having a core range is a great steadying force for a brewery (and certainly would make cash flow dramatically smoother I’d imagine), and folk get to develop lasting and long term relationships with certain beers.
Instead, I guess we’re hoping people continue to enjoy the exploration along with us.
We don’t ever say that we’ll never ever have a core range, but that’s because we prefer to talk about what’s happening now rather than the limitless possibilities in the future.
Our position isn’t about being against core, just more for keeping things open and free. 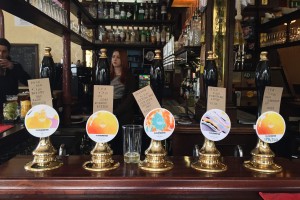 Where do you brew and what do you use?
We brew out of our warehouse in Piccadilly Trading Estate using a brewery from Premier Stainless Systems, who are based in San Diego.
There’s a lot of fantastic manufacturers out there, but Premier have been in the business of building breweries longer than I’ve been drinking beer, and have installed systems for some of the best US brewers.
Their equipment is comparable in price to that of UK companies but the specification was a much better fit for us.
We have three vessels on the hot side of the brewhouse, meaning we can double brew (producing around 4600 litres of wort) in a single long day.

What music do you listen to in the brewery?
If I have my way it’s something like Biosphere, Toumani Diabaté, Dom and Roland, or Orem Ambarchi through to classic 80’s pop, but we all have such different (and in most cases dramatically opposed) tastes that we’re currently finding life a bit easier not listening to any music at all.
Biosphere!
I’m a fan of Geir Jenssen and his music and a huge fan of Rune Grammofon and Norwegian avant music in general.
Thanks for the tips!
Supersilent are a big favourite here and I’ve released one or two things for artists such as Lasse Marhaug and Sindre Bjerga on my record labels in the past.
Supersilent are fantastic.  They introduced me to Aki Onda who supported them in Manchester a few years back.  A life changing performance if ever there was one!
I mention all this because the whole look of Cloudwater has the same feel as many of the records of that ilk.
Maybe it has influenced the way Cloudwater looks?
I’d like to think so.
I’ll take inspiration from anywhere I find it, and certainly think a lot about things with the same mindset I use when considering sound and music.
We work with a new artist every season too, so rather than establish a look that we’ll stick with for years, we keep things fresh, and learn a lot more that way about how artwork and branding effect the way we and other people see us.

What are your plans for the future?
Chiefly to make much better beer than we do right now.
We’re aiming as high as we can go.
We’re off to a good start, and have enjoyed generous and kind support from both our new and old friends in the trade and industry, as well as unbelievable enthusiasm from our customers, but there’s no limit to what we want to achieve.
Our barrel programme is only just getting going, and will end up seeing us output a range of matured and soured beer through bottle releases and eventually our Barrel Store bar.
But there’s more we’re working on too, such as integrating our assistant brewer’s love of Brettanomyces.
To be fair, he’s far from alone in loving what Brett does to beer, but we wanted to get ourselves up and running with some existing beer styles before we push into creating some new styles ourselves.
As a new company, and especially one that is set out to redefine itself every season, we’re determined to keep our options as open as possible.
We cherish the freedom we have now to take things as they come, and while we don’t quite know where we are going, we do know we’re out to really enjoy the ride!

I’ve also been trying more of their beer.
Here are the latest three that I found. 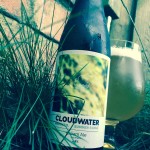 Cream Ale (4.8%)
This is a clever little beer.
It starts off soft and smooth, delicate, round and creamy and then, just as you think you know what you’re getting, it punches you in the face with a sharp fresh hoppy hit.
The smell is flower borders and lime juice and the beer sits a light gold in my glass.
The malting is gentle and buttery, all croissants and caramel, and the hops – Citra, Amarillo, Eldorado, Mosaic and Centennial – provide huge bunches of fresh herbs, marigolds, lime and lemon, grapefruit and mango.
The finish is dry and crisp but with a delicate rounded feel. 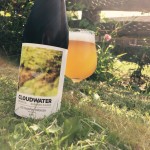 US Hopfen Weisse (5.2%)
Wow.
Absolutely wow.
The texture, the feel, this is a classy beer.
Cloudwater’s Hopfen Weisse, brewed with Simcoe, Citra and Mosaic, has taken my breath away.
This cloudy golden beer with its little creamy head smells of fresh meadows and lemonade, while its malts are soft and creamy, a light buttery brioche and ice cream cone bolstered by the warm earthy spice of the yeast.
Over this the hops simply sing.
Mandarina nd kiwi, pineapple, pomegranate and grapefruit all wrapped in sherbet for a clean and fizzy bitter sweet finish. 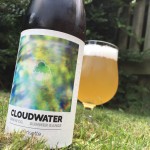 Grisette (3.5%)
I’m not a huge fan of this style, but this is a remarkably delicate and very drinkable little beer.
Pouring a pale straw, the aroma is lavender, barley fields and citrus groves.
The malting is soft gentle, a light creamy texture and some subtle honey popcorn flavours.
There’s a snappy fresh hop too, it’s crisp and clean, herbal and green, and it leads you towards a soft whisper of a finish that’s all lemon zest and pine nuts, peach and lime juice.

Thanks to Paul at Cloudwater for his time.
Brewery photographs borrowed form the Cloudwater website.
Beer sourced from The Beer Hawk