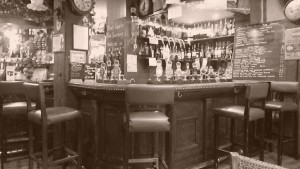 Given that the local beer was somewhat disappointing during my recent Jersey trip an alternative was needed after sight seeing and frequent escapes from the rain that plagued us during our stay!

A quick online search threw up The Lamplighter which was the CAMRA Wessex Region Pub Of The Year 2014. It’s managed by Randalls, once a brewery itself, but since 1992 manages a pub estate across the Channel Islands.

It’s an old fashioned looking pub that is a hit with locals and holidaymakers alike decorated with old style lighting hence the name plus an array of dried hops, pump clips and tankards along the beams and ceilings which gives it a cramped feeling. The staff are friendly and the impressive bar boasts 12 hand pumps split between 8 ales and 4 ciders with many more available in bottled form. They also boast the largest selection of whiskeys on Jersey and also had a range of home-made flavoured vodka. Chilli death anyone?

So back to the important stuff, the beer. There was a selection of beers from the Channel Islands and alongside the mandatory brew from Liberation (Jersey) there was an offering from the first micro brewery from Guernsey in the shape of  White Rock Brewery Co’s Wonky Donkey (4.7%) which thanks to it’s mix of English and US Hops was a malty, citrus tinged pint. Nice.

Randalls stocks beers from Skinners in it’s pubs and I sampled the highly rated Porthleven (4.8%) for the first time and I was not disappointed with this fine golden ale packed full of citrus and having a sharp, zingy taste. There were also a couple of beers from Marstons . One was the single Hop Saphir (4.0%) which is a hop from Germany. It was a copper ale that again had a citrus flavour but this time orange rather than grapefruit or lemon! It also had hints of pepper and spice. An interesting rather than a great beer.

The other one was American Independence

Ale (4.9%) that is a collaboration with the Maine based Shipyard Brewery and is brewed at the Banks Brewery. It’s been around for a couple of years now but this is the first chance I had to try it. It’s a bitter and dry pale ale packed full of grapefruit flavour and aromas. Initial gulps were pleasant enough but the following pint was a struggle to finish.

Whilst the pub also had some bog standard ales on offer it also has by far the largest range of beers of any Jersey pub and all I tried were well kept. If you ever find yourself in Jersey I would recommend a pint or two in there. It’s just a short brisk walk from Liberation Square.