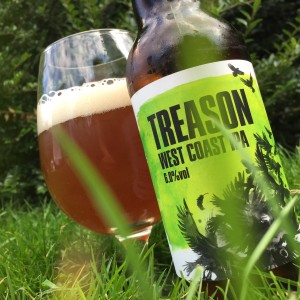 Treason (6%)
A year ago I was sent a little plastic bottle containing a sample.
I poured a rich deep amber and had a light frothy head.
It was a sample of Treason, Uprising’s first beer.
And now, a year later, it has gone into bottle production and it’s absolutely lovely.
It’s a mandarin and grapefruit driven delight, fizzy with sherbet and tempered by a succulent chewy malt full of toffee and crusty bread, and it has a very nice peach, mango and cucumber aroma.
The alcohol has gone up slightly from the original version I tried, and there’s a little less of the pine resin that I remember, but with its long and bitter dry finish, Treason is a very good IPA indeed. 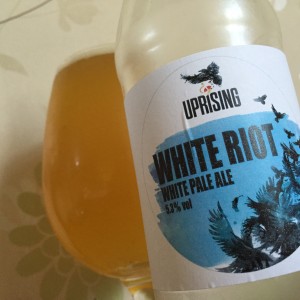 White Riot (5.3%)
Along with Treason I was sent a little plastic bottle of Uprising’s second brew taken directly from a keg.
White Riot is a wheat Pale Ale with a light golden straw colour and a hay bale and spicy yeast aroma.
The malting is super light and beautifully sweet with popcorn and runny honey, and there’s a very good fresh green herbal leaf hop that zaps you with lemon zest and passion fruit, taking you to a finish that has a smooth creamy background under a pin sharp dry bitter bite.
Another very good beer from this fledgling brewery, and having used Teardrop Explodes and The Clash, I wonder which New Wave band they’ll name their next beer after.