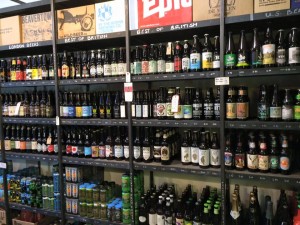 Some things are made for each other. Sun and sea, egg and bacon, bread and butter and beer and football. It’s the latter that was the basis for this crawl as we headed to East Dulwich in South East London for Dulwich Hamlet’s clash with Billericay Town. I will not bore you about the Hamlet is now a community centered club but you can read about it here.

As part of that philosophy they serve brews sourced locally in their bar (normally 4 casks with two on at each time) and I plumped for the locally brewed Clarkshaw’s Strange Brew #1 (4.%). It’s a hazy looking pint packed full of malt and fruit. Not sure if it was the plastic glass (you can drink whilst watching the game) but I found it a bit odd to be honest. And if you are wondering Hamlet, who are sponsored by Penge Brewery Late Knights, won a pretty dull game 1-0 thanks to their keeper pulling off a world class save (Gordon Banks eat your heart out) and then a substitute scoring a stunner winner.

After the game we headed off to the East Dulwich Tavern which is the pub of choice for an after match beer for many Hamlet fans and thus was the start point for our crawl. It is one of the better Antic pubs I have been in. I have not had a bad pint here and plumped for Darkstar Hophead (3.8%) a beer I haven’t supped for a while now. It was well kept but has its overall taste changed? It was not as exuberant as I remembered. Maybe I should drink it more.

After the leaving the EDT we headed round the corner along the East Dulwich Road until we came to The Flying Pig. It has an extensive beer range with 18 beers on tap featuring a number of local brews. It also has an American themed restaurant at the back.

I had a pint of the latest Hopstuff Single Hop beer in the shape of Centennial (4.2%). Wow what a brew. Centennial is a hop packed full of citrus (it tasted lemony/grapefruit to me) with a strong floral aroma. It took so long to pull though due to being so damn lively that it took the chap behind the bar ages. We showed no pity however and promptly ordered another round! Staying on the lemon we also sampled Wild Beer Slee 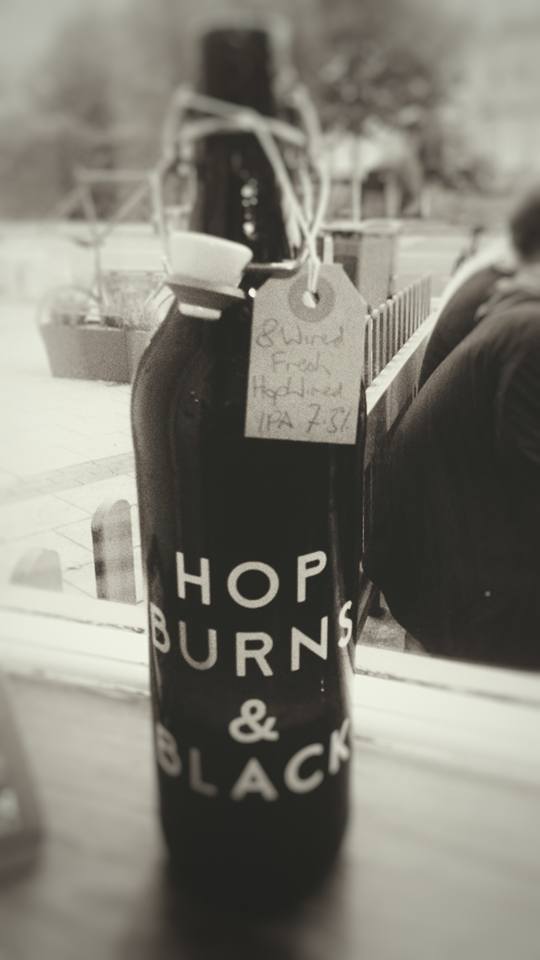 ping Lemons (3.6%) which is made from preserved lemons. The initial taste was very pleasant and lemony (what else?) but that quickly gave way to a bland watery taste. It may go well with a tagine but it’s a no no down the pub!

Our next destination was less than a minute away. I have discovered some exciting places to drink this year and here is another in the shape of Hop Burns & Black. Selling over 300 bottled beers it also has a flagon-filling station for draught beer. Scotch eggs are also available with a range of hot sauces.

As our appetite was whetted by both we went for a flagon of 8 Wired Fresh Hopwired IPA (7.3%) which is a New Zealand brewed beer. It was packed full of tropical fruit and flavour. I am not kidding when I say this is one of the best beers I have ever drunk. Truly incredible. Note that Hop Burns & Black shuts pretty early (9pm on Saturdays) so check the opening times on their site. You also get a discount if you have been see Dulwich play on the day you go!

Forcing ourselves away we headed through the back streets that join East Dulwich and Peckham heading to Rye Lane for The Four Quarters. As well as selling a range of craft ales on keg it is also a dedicated classic and retro arcade games bar featuring a number of games that people of a certain age (like me…) will remember playing the first time round. We hit the pinball machines and the vintage Space Invaders whilst enjoying Brew By Numbers Saison (5%). The beer was not cheap being a fiver a pint but the Four Quarters is such a fun place to drink that cost became irrelevant. 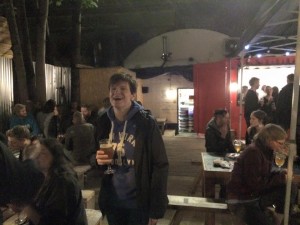 For our next port of call we hopped (pun intended) round the corner to a railway arch under Peckham Rye Station which is home to The Brick Brewery. It was a nice set up in the courtyard with an outside bar and Bratwurst sausage stall. I really like their Sir Thomas Gardyner (3.8%) so why not drink it at source? It includes summit and simcoe hops resulting in a golden pint full of citrus flavour with a slight bitter after taste. Absolutely refreshing and an ideal session beer if there ever was one! Again check their opening times if you are paying it a visit.

Our final stop was Late Knight’s Beer Rebellion at Queens Road, Peckham which is a brisk 15 minutes walk away from Brick (or a quick hop (doh!) on the train from Peckham Rye). We picked a bad night to visit as their keg chiller had packed in meaning there was limited choice on cask. So much so that one couple were ordering gin at the bar! I plumped for the London Beer Factory Paxton Pale (5%) which was a malty American style pale ale with hints of fruit and grass. It wasn’t a bad pint but couldn’t stand up to beers sampled earlier. Offside!

And the result? A cracking crawl all round. I will certainly visit Hop Burns and Black again and shoot down a few more aliens at Four Quarters too. Football optional!