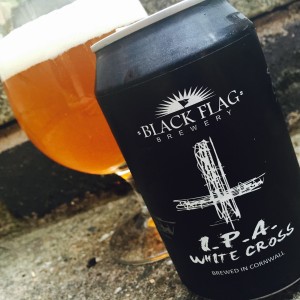 If I had nothing but a six pack I could do much worse than making it a six pack of White Cross, Black Flag’s IPA.
The aroma is fresh and fruity, full of satsuma zest and peaches, there’s a good toffee wafer, ice cream cone malt that provides a brown sugar rich body, and over it there’s a big juicy hopping.
Loads of mango, apricot, lime juice, mandarin and lemon all tingle on your tongue and lead you to a long, lightly metallic, herbal leafy finish.
Superb.