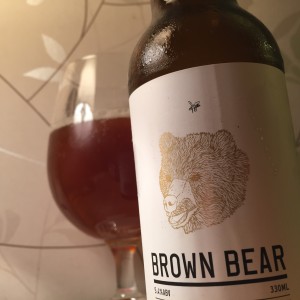 This is a review of two halves, in the first half this is brewed with birch smoked wheat and Wirral honey it might be, but I’m struggling anything to get my teeth into here.
Don’t get me wrong, this is a very nice little Pale Ale with all the things that make me happy when I drink it.
You know, there’s a good caramel and wafer biscuit malt tinged with burned brown sugar and salt, and there are some nice sharp green herbal hops that cut across the sweet round body.
That’s all very nice, but I was expecting more than just the honey aroma and the lightest whiff of smokiness as I arrived at the bitter finish.
And that is where I was going to leave this review, but something interesting happens about halfway through Brown Bear.
Something really rather nice.
In the second half a dense sappy, resinous woodiness slowly builds and, though it’s not smoky per se, it’s definitely birch, as anyone who has had various bits of salmon smoked with the stuff will agree.
The result is that all of a sudden Brown Bear becomes a rather lovely thing, rather than just the decent Pale Ale it pretends to be when you started.