Posted on September 5, 2015 by Simon Williams 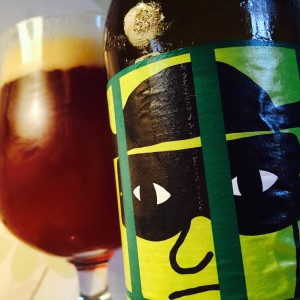 I was so sure that I’d had this before but both Untappd and my own blog tell me otherwise.
So I’d better write about it.
1000 IPA is a big Imperial IPA with a superbly dry bitter finish.
I’ll tell you something that it’s not though.
It’s not a beer that makes me wax lyrical and say silly things, it’s just a superbly made beer crammed with rich sticky caramel, burned candy sugar and brandy snaps and a hint of ginger nuts.
The smell is resinous pine and boozy peaches, it’s a smell that continues to crawl up your nose and tingle in the back of your eyes even as the hops hit you with melon and mandarin, tobacco and grapefruit.
And then there’s the way that the beer sucks every little bit of moisture from your face and leaves you a dry and empty, but immensely satisfied, husk.