Posted on September 7, 2015 by Simon Williams 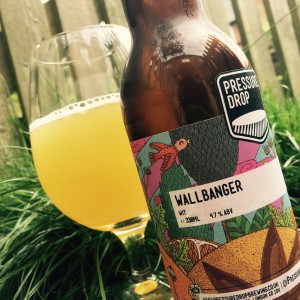 It would appear that I’ve finally come across a beer from Pressure Drop that I’m not a big fan of.
Wallbanger is a Wit that pours a pale cloudy yellow and with barely a head.
It smells of bread dough and weak lemonade and has a soft and light caramel and waffle malt.
There’s some back garden shrubbery, lemon juice and pomegranate in the hopping and I think I can detect a hint of orange juice too, but the finish feels rather flat and limp.