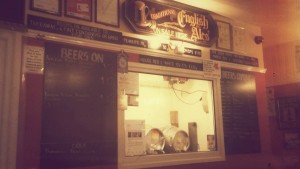 Given the amount of time I spend in south east London I am amazed it’s taken me this long to visit The Door Hinge. It’s been on my list for a while and I took my chance when other plans fell through.

At first glance it’s typical of the micro brewery pubs found in Kent (yes I know it’s the London borough of Bexley but old borders die hard around these parts…..). On entry you are faced with what looks like a large one room pub with tables and seating all around the walls. There is a small bar so you can go up and order your beer which was kept in a back room with a glass partition facing the drinkers. The beer was in and served direct from the casks. The walls were covered in pump clips and there were blackboards listing current and forthcoming beers. However walk at the back towards the single toilet and you come across a smaller room with another space for a dozen people. Just like the TARDIS…….

Whilst not too crowded on our visit the atmosphere was friendly and we joined in the banter about footy – what else given it was a stones throw from the Welling United ground? The landlord also took time to talk to us about the forthcoming green hop beer and to sort out the confusion of being served one beer by his stand-in when in reality it was another as we found out when re-ordering. 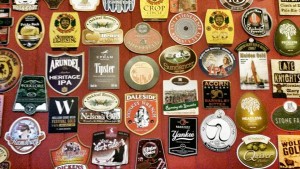 y a quid into the charity jar which also contributed to the jovial and relaxed atmosphere. Or was it the severed hand holding a mobile nailed to the wall?

And the  beers? There were three beers on in excellent condition being Rockin’ Robin Robin Red Best (4.0%), Purple Moose Madogs Ale (3.7% ) and Brains The Rev. James Gold (4.1%). Whilst not the most exciting line up in the world (unlike the forthcoming beers list – sob!) they were all consistent and tip top condition. I settled on the Rev.James Gold which is a revelation in itself as I don’t normally enjoy Brain’s beers. I really enjoyed my visit. It certainly will not be too long until my next.