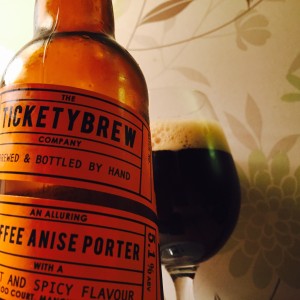 I keep trying with this brewery and I keep feeling disappointed.
A Coffee Anise Porter sounds terrific, almost all Ticketybrew’s beer sounds terrific.
But it just isn’t.
There’s something fundamentally missing from this beer.
For a start the beer neither smells nor tastes much of aniseed.
Instead it tastes quite a bit like dried, old, faded and stale chilli flakes, like the ones you find in a bag in the back of the kitchen cupboard of every student house up and down the land.
The Ethiopian coffee is weak and watery, insipid even, removing body rather than adding flavour.
There’s a little bit of treacle from the malts and a little bit of hedgerow from the hops, but nothing is enough, everything is half hearted.
And this leaves a great big gap right in the heart of the drink.
A big watery nothingness where beer should be.
Maybe I should give up and move on.