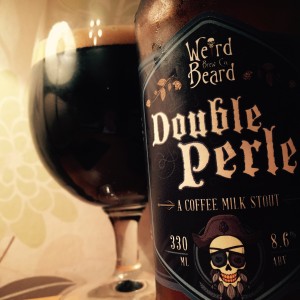 Weird Beard’s Coffee Milk Stout is every bit as good as you’d hope it to be.
A bit of a big sister to Black Perle, it’s Weird Beard’s 100th brew and it’s big and warm, sweet, chewy and satisfying.
The aroma is treacle tart an black coffee, and that’s pretty much where the flavours begin.
But it doesn’t stop there.
Instead the beer grows from its pudding like beginning, giving you plums and prunes, heather honey, cheesecake biscuit base and vanilla pods.
HasBean‘s coffee is rich and woody and there are even some hops in here, they’re crunchy and brittle, crisp and red and leafy, full of earthy hazelnuts and bracken.
The result is a big boozy beer made smooth and creamy by its lactose.
Double Perle is, in a word – albeit it not the most technical word – yummy.