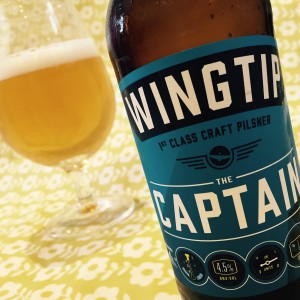 Call me a pedant but the first thing I noticed was that the word fuelled has been spelled incorrectly (unless you are using an American dictionary) on the front of the bottle.
The Captain is a Pilsner and it’s alright.
Not great, but alright.
It doesn’t do anything wrong at all (apart from spelling), but it’s a bit middle of the road.
A soft wafer and caramel malt and the lightest of spicy hedgerow hops give way to a crisp clean finish while the beer smells of honey and straw.
You see?
All OK, but we have so many “Craft Lagers” out there now and a lot of them are drinkable but uninteresting.
And this is one of them.